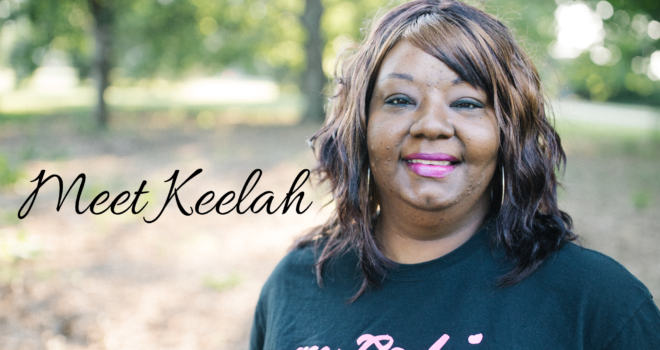 Keelah joined our Race group in 2012 with her team Keelah’s Koconuts. At the time she was a 2 year breast cancer survivor.  It all began in December 2010 when she had found a lump while taking a shower.  She did what Komen suggest, when something with your body changes, see your doctor.  The doctor scheduled a mammogram.  After not only a mammogram, but also an ultra sound and biopsy she was diagnosed with breast cancer.  Her treatment consisted of a mastectomy, 4 rounds of chemo (the red devil, for those familiar) and then tamoxifen.  In 2014 she had reconstructive surgery, the last part of her breast cancer journey. Or so she thought…

Two months after her reconstructive surgery she noticed that she was having difficulty breathing.   She really didn’t think too much about it, as she had put on a few pounds and had not been exercising regularly. She simply chalked it up to being out of shape.  However, when things didn’t improve, she was prompted one day, by a co-worker, to go to the ER that day to have a chest x-ray.  After further testing, it was discovered that she had a large mass on her left side.  That mass was cancer and was present in her lymph nodes and lungs. It was at that time she officially joined the sisterhood of MBC fighters/thrivers.

Keelah’s new normal week consists of working on Wednesday and Thursdays, then chemo. She has the chemo routine of  Fridays every two weeks then one week off.  Every 3 months she has an MRI.  Since her MBC diagnosis there have been other tumors. In 2018, doctors found evidence cancer on her femur, after she had a fall.   Just last year, her doctor noticed that she had some memory problems which lead to evidence of disease on her brain.  With each new diagnosis, comes adjustments to her treatment plans.   She has had oral chemo but she could not stand the side effects to it.  Then she had an allergic reaction to another treatment plan.  Some have treatments have actually eradicated some of the cancer areas and improved others.

Keelah is a parent of three beautiful girls, ages 14, 17 and 19. They are the reason she never gives up.   She credits her parents, Church and work family, who have all been such great supporters.     She lives as a FOREVER FIGHTER.   She does not know where her journey will take her, but she has her Faith, family, her medical team and friends who are there every step with her.

Join us on Race day as we celebrate with our Survivors and stand beside our FOREVER FIGHTERS.