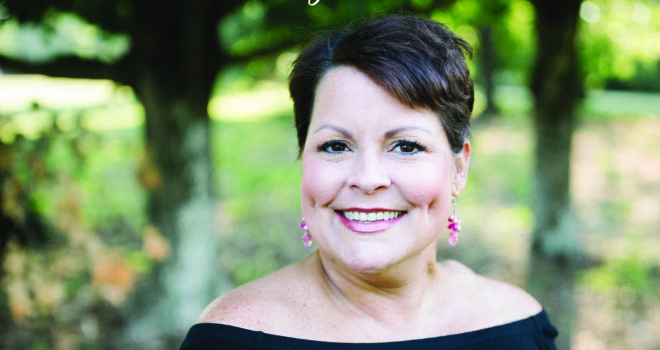 If you have been around a little while, you might recognize this “featured face”.  Shelby was our honorary survivor chair for Race for the Cure in 2005.  It was at that time, at age 26, she was diagnosed with stage II breast cancer.  While she acted as our honorary chair for Race for the Cure that year, she spoke at our survivor luncheon, had a bilateral mastectomy, endured 6 rounds of chemo and was prescribed tamoxifen for 5 years.   At that time, she was told due to her treatments she would more than likely not be able to have children.  Shelby has since married and will be celebrating their 10 year anniversary next month.  She and her husband Brian have two very active children, Hayes age 9 and Stella age 5.

You may wonder why she is a cover girl again this year.   Two years ago, this November, Shelby started having problems breathing.  After multiple trips to a variety of doctors looking for relief that didn’t come, she found “the lump”, in the same area as last time.   After a biopsy, ultrasound and other tests, it was determined that her cancer had spread to her bones, thoracic and lumbar areas.  At that point, she was diagnosed with metastatic breast cancer.

Shelby is again determined to fight!  She plans to fight to be there for the most important thing in her life, her kids.  So far she has undergone 6 chemo treatments, receives maintenance infusions every three weeks, has an injection once a month and takes a pill twice a day.   But she continues to charge forward!  She also goes for a scan every 3 months.  Her first scan, after starting treatment, actually showed a slight improvement of the lesions.   She has been stable for 1 ½ years and makes the most of every precious day with her kids and husband.

Shelby and her family have participated in and supported the Knoxville Race for the Cure since she was first diagnosed in 2005, with their team Guardian Foundation Repair.    Please join them or start your own team to support the women and men in their fight against breast cancer.

New at Race this year, we will be recognizing MBC fighters and thrivers, like Shelby, with a special “forever fighter” t-shirt. Also, later in the fall we will be hosting a conference, entitled “Living with Metastatic Breast Cancer” and we invite fighters and their care givers to attend. To find out more information, please visit the MBC tent at Race.